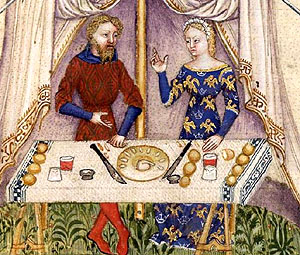 Western table cutlery settings today always feature a knife, fork and spoon, each one with its particular use. Spoons for the soups, sauces; knives for cutting food into manageable pieces; forks for moving the food from plate to mouth. But this organised (and well-mannered) approach is relatively new – at least in terms of human civilisation.

Knives were probably the first of the ‘cutlery set’ to appear. Evidence dates them right back to pre-historic times when sharpened flints, volcanic glass and bones were among the earliest cutting implements in use. With the advent of the Bronze and Iron Ages, knife blades became more sophisticated and, though still used primarily for hunting and as weapons, the knife’s utility was hard to ignore, and smaller versions of it became handy for assisting in eating and cutting in general.

Spoons have been around since the Stone Age too, with shaped stones, shells and hollowed-out animal horns being some of the discoveries that testify to their use.

Forks were known in Greek and Roman times but virtually disappeared from use during the Christian Middle Ages. Some historians have suggested that the fork’s shape was too reminiscent of the devil’s pitchfork but it is more likely that the knife’s versatility – it could be used for spearing food and bringing it to the mouth as well as cutting it – overrode the need to invest too much time and craftsmanship into the fork. And hands were, well, just as ‘handy’ for picking up food (and always ‘on hand’). It seems, however, that the fork did reappear in Western Europe in the 16th century when courtly society deemed that eating was more politely accomplished by digging forks rather than hands into food.

In the Middle Ages all travellers carried their own knife and spoon for eating when staying at an inn on the journey as the innkeeper did not provide guests with cutlery because such useful, well-crafted, and portable items were considered too ‘tempting’ and likely to be stolen by passing strangers: a different take on the “dish ran away with the spoon” in the Hey Diddle Diddle nursery rhyme (which, by the way, seems to date back in some form to medieval times).

One of my favourite ‘literary spoons’ is the runcible spoon in the final part of Edward Lear’s wonderful poem The Owl and the Pussycat:

They dined on mince and slices of quince

Which they ate with a runcible spoon

And hand in hand by the edge of the sand

They danced by the light of the moon, the moon

They danced by the light of the moon.

‘Runcible’ is today said to describe a sort of combination fork, spoon and knife; a fork with a curved section like a spoon, and with three broad prongs, one of which has a sharpened outer edge for cutting. In Australia we might call such an implement a ‘splayd’ or a ‘spork’. Actually, though, Edward Lear made up the word (along with others of his invention) as a whimsical addition to his poem. And cutlery to match the whimsy followed.

2 Replies to “Forks in the Road (and other cutlery)”

“Compassionate toward oneself, we reconcile all inner, and the universe - from within.”