I don’t have to think about it. I admit it: I am a dog person. There’s something about dogs’ joyful optimism and irrepressible enthusiasm for everything from food to a good stick that makes me happy; not to mention their devotion and companionship. And, in truth, I’ve never had a cat as a pet whereas I could not imagine home life without a dog. Nevertheless, I have friends who couldn’t live without their cats and so when I decided to write a blog or two on animals in the Middle Ages, I decided, in the interests of fairness and balance, to start with cats. (Dogs will follow at a later date).

The people of the Middle Ages saw cats in both a positive and negative light. Their biggest “plus” was that cats caught mice, no small mercy in an age that was ridden with rodents. Some medieval commentators, however, compared the way in which cats toyed with the rodents before killing them to the way that the devil played with people’s souls before possessing them completely. From this comparison it was not a large step to believing that the cat, like the devil, could alter its shape and appearance for fair means and foul.  And there was something about the cat’s independence – its disdain for the closely-held belief that God had made animals for the service of humans – that provoked suspicion. And, it’s true that this view resulted in medieval cats being often very cruelly treated.

Fortunately, not everyone shared the suspicion; there is quite a lot of evidence in the literature of the time that shows that many medieval people were very fond of cats.  The Ancrene Wisse, an early 13th century guide for enclosed anchorites, recommends the keeping of a cat, and no other animal. In 14th century Exeter Cathedral had a cat on its payroll at 13 pence per quarter; and in the 1360s that amount was raised to 26 pence per quarter (though, perhaps, indicating an increasing rat problem that called for the employment of a second cat rather than representing a pay rise for the first cat).

A ninth-century monk inserted this poem to his cat in the margin of the manuscript he was working on:

So in peace our tasks we ply,
Pangur Bán, my cat, and I;
In our arts we find our bliss,
I have mine and he has his.

In fact, cats and manuscripts seemed to have gone together in the Middle Ages as can be seen by the paw prints left on a 15th century manuscript from Dubrovnik:

And such neat and strong paw prints they are, recorded for posterity. Now, a dog would never have been able to manage that! 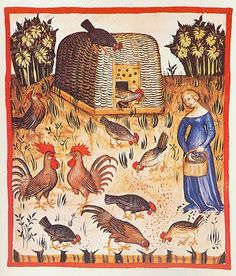 My neighbours have built a chicken coop (‘a chook shed’ as we Aussies say) in their suburban backyard with high hopes of having fresh eggs for breakfast for many years to come. It’s a good plan and one to which people the world over have subscribed for many, many centuries. Today’s domesticated chickens are, apparently, descended from the Red Jungle Fowl of South Asia. The Romans are thought to have brought chickens to Britain with them and it’s the descendants of that Roman poultry that have become the focus of some intense archaeological studies in the past few years. What particularly drew the archaeologists’ attention was the discovery of substantial increases in the quantity of chicken remains that could be dated between the 9th and 12th centuries. Though chickens had been an easy and popular feature of even the humblest farms prior to, and following those centuries, several studies noted that the 9th – 12th century increase correlated with a surge and expansion of the farming and fasting practices of the Benedictine monks: they abstained from the eating of meat from quadrupeds but, as birds (and their eggs) were not considered to be ‘meat’ – having only two legs –  the raising of chickens on their monastery lands was a good way of feeding the monks and honouring their fasting obligations. The spread and influence of the Benedictines in these centuries very soon saw their fasting practices adopted by large portions of Christian society. A simple case of chicken and egg.

It got me thinking about a chicken and egg experience of my own.

One year, in an effort to give our city-born-and-bred daughters a taste of ‘rural life’, we hired a farmhouse cottage for the July school holidays. The cottage was ‘rustic’ to say the least, with bare, unsealed floors, lumpy beds and no heating except for a wood-burning stove in the little living room. This left the kitchen and bedrooms bitterly cold in the Oberon winter. Still, we reasoned that frosty breath in the morning, and icicles on the windows were part of the adventure. A blanket of snow in the surrounding yard was also a bonus. In the yard, too, much to the delight of three little girls, was a chicken coop with one – and only one – fat, red hen. The farmer, greeting us on our arrival, told the children that the hen’s name was ‘Henrietta’ and, pointing them to a bag of chicken feed, he said that they could feed her each morning and evening. They were beside themselves with joy and, as soon as the farmer took his leave, they were in the coop with Henrietta.

“Be gentle with her,” I instructed.

“We will, Mummy, but we just love her. Do you think she’ll lay some eggs?”

“Well, I certainly hope so,” I replied. “That’s what hens do.” What I, as a city-born-and-bred mother did not know, however, was that chickens don’t lay very reliably when the mercury is sitting below freezing most of the day and night.

Now, whether it was indeed the freezing weather, or the hen’s nervousness at being so greatly loved by three little girls, the first week passed without my daughters discovering a single egg in Henrietta’s coop.

“Mumma, you said she’d lay eggs,” they moaned as they tramped despondently back into the cottage empty-handed again.

Our days at the farm were ticking by and, with only four mornings left, I decided to take the egg production business into my own hands. After the girls were asleep that night, I crept out to the chicken coup with a torch in one hand, and a fine, brown egg from a carton purchased at the local supermarket in the other, and I carefully placed the egg next to a somewhat alarmed chook.

The next morning the girls made their way doggedly to the hen-house, mumbling that it would be another waste of time. I smiled quietly to myself as I heard their excited cries.

I ran out, arranging a fake look of surprise on my face as I went, but my pretence turned to real surprise when the girls stood in front of me with an egg each in their hands.

“Mummy, Henrietta’s laid three eggs,” they said, proudly holding up their discoveries for my inspection. There, in front of my eyes, were three brown eggs – and only one of them was store-bought.

Over the remaining days of our farm stay Henrietta managed to produce two eggs each morning, without any prompting from me and, nearly twenty years on, Henrietta lives on in the memories of my daughters – and of me, especially – as a chook who could take a hint. Like most of us, all she needed was a little encouragement.

Today, we humans are very conscious of the importance of bathing for reasons of hygiene but it wasn’t always so. In the Middle Ages, for example, bathing had little to do with cleanliness but was undertaken for either pleasure or restoration of health. On the “pleasure” side, communal baths provided social opportunities, with food and drink being part of the overall experience in a sort of medieval equivalent of the present-day “Gold Class movies”. In fact, the pleasurable and social aspects of community bathing are clearly attested to by the many – rather surprising – manuscript illustrations on the topic.

Very probably because of the frequently  indulgent and decadent quality of medieval bathing,  monks  of that time – although they often washed their hands and feet  –  were limited by their monastic Constitution to complete bodily immersion at Easter and Christmas time only, leaving a very long, hot (northern hemisphere) summer period between washing. Bathing outside those specified times was permitted if a monk was ill as bathing, in moderation,  was believed to be sometimes necessary for the restoration of good health.  Of course, bathing for health reasons always took place in public baths where the drinking of, as well as bathing in, the waters was encouraged. In the fourteenth century, the medical men of Bologna recommended to anyone suffering from scabies that they take a full plunge in the public bath following a vigorous application to the skin of a mix of bran, chickpea meal and saltpetre; and then drink of the waters.

In some cases the mistrust of bathing seemed to exemplify the view that “UNcleanliness is next to godliness”.  St Antony, for example, a hermit in the Egyptian desert during the 3rd and 4th centuries, did not wash any part of himself for at least the last half of his very long life of 105 years. In fact, his biographer tells us that the hairshirt Antony donned when he went into seclusion was not taken off until his death when his followers cut it up and shared out pieces of it as a “holy relic” for each of them.

A hairshirt was an undergarment made of very coarse animal (usually goat) hair that was worn next to the skin where it caused continual irritation. Individuals seeking to mortify their bodies as a form of penance found the hairshirt to be very effective.  Thomas A’Becket (“The Saint of Canterbury”) is said to have been wearing a lice-ridden hairshirt under his bishop’s robes at the time of his murder in 1170. Margery Kempe, a 14th century wife, mother, business woman and mystic, records in her (dictated) autobiography that she wore a hairshirt for a number of years, even during the conception of some of her fourteen children. This gives a whole new meaning to “unconditional love” but also reminds us that our modern olfactory sensibilities are very different, much more delicate, than those of days gone by.

Ideas , thoughts etc what ever come to my mind when I either close my eyes or open them! Simply they are what depend upon my little fellow mind

The Art Or Endeavour Of Being Lucid In A World We Live In... Secrets Of The Psychics... Energy, Universe, Futurism, Film, Empowerment...Digital Abstract Art Rendering...

It's written by Casey

a twist of witty humor