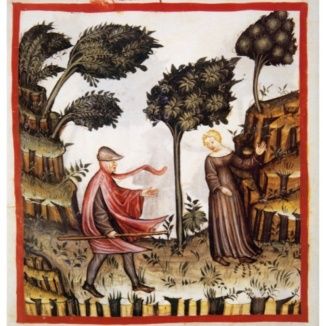 Today in Sydney there is a wild wind blowing. Trees are down and flights have been cancelled. We only have to look (or venture) outside to see (and feel) the effects of the strong wind but exact measurement of weather components is a sophisticated process in our modern world. Of course, now, accessing those components and getting the latest weather updates and warnings is as simple as a few clicks through to the Bureau of Meteorology but the understanding and interpretation of weather in the Middle Ages was a very different thing. And instruments were limited. It wasn’t until after the Middle Ages – in the late 1500s – that Galileo invented a basic thermometer; and it was 1644 when Galileo’s colleague, the physicist and mathematician, Evangelista Torricelli, invented the barometer for measuring atmospheric pressure. Before that, the medieval people used weather vanes – with the word vane deriving from the Old English word fana meaning flag – for the indication of wind direction, and relied mainly on their own subjective views and experience of what was happening around them for further weather information.

That is, sources for weather data for the medieval period are scarce and historians generally now turn to chronicles and narrative accounts for their insights into climate and its effects. In most instances, objective evidence is limited largely to the observation of physical changes to the local environment brought about by weather and climate events.  For example, the following vivid description of a thunderstorm which took place in northern England in July 1293 is given in Chronicle of Lanercost :

“Early in the morning…we beheld in the east a huge cloud blacker than coal, in the midst whereof we saw the lashes of an immense eye darting fierce lightning into the west; whence I understood that Satan’s darts would come from over the sea. … [and] there began and continued throughout the night over the whole of the west part of the diocese of York, thunder and lightning so prodigious that the dazzling flashes followed each other without intermission, making, as it were, one continuous sunlight. Not only men were terrified and cried aloud, but even some domestic animals – horses, for certain. In some places houses were burnt or thrown down, and demons were heard yelling in the air.”

And, in my opinion, the best ‘potted’ description of the extremes of the seasons is given in the anonymously authored 14th century alliterative poem Sir Gawain and the Green Knight. Here’s an extract, first in the Middle English, and then in translation:

But then the world’s weather wrestles with winter:
cold clings to the ground, but clouds rise,
releasing warm rain; rinsing showers
fall to the flat earth; flowers appear,
both field and forest are fringed with green.
Birds busy themselves building, and with brilliant song
celebrate summer, for soon each slope
will rush
to bloom with blossoms set
in lines luxuriant and lush,
while noble notes form nets
that fill the forest hush.

Then the summer season when the west breeze blows
and soft winds sigh on seed and stem.
How the green things glory in their urgent growth
when the dripping dew drops from the leaves,
waiting for the warm sun’s welcome glance.
But then Fall flies in, and fills their hearts,
Bidding them be rich, ripe, and ready for winter.
The autumn drought drives up dust
that billows in clouds above the broad earth.
Wild winds whistle, wrestling the sun;
Leaves launch from each limb and land on the soil,
while the green grass fades to grey.
What rose at the first now ripens and rots
till the year has gathered its full yield of yesterdays.
In the way of the world, winter winds

Much nicer description of the weather than we’ll hear on tonight’s TV weather, don’t you think?