One of the most read sections in today’s magazines is the Horoscope. This suggests that even if we deny a belief in the direct influence of the stars and planets on our daily lives, we at least entertain the possibility that people of the same star sign might share some broad personality characteristics.

In the Middle Ages no such ambiguity existed. Everything in the world was understood to be connected to everything else in some way, and the idea of “as above, so below” held sway. What existed in the heavens above, existed in the world below. As everything, everywhere, was thought to be composed of various combinations of the four elements – earth, fire, water and air – when something moved or changed in the heavens above, human bodies reacted below. Medieval people had witnessed the effects on the phases of the moon on the Earth’s tides so why wouldn’t the body’s elements similarly respond? And respond even more markedly to the (apparent) movement of the stars and planets in the sky. The influences of the heavens above were believed to be particularly influential on the body’s health (or ill-health), with the different astrological phases influencing different parts of the body.

Thus, “Zodiac Man” was born as a handy guide to pinpointing general ailments and weaknesses in the body. Broadly, here is a summary of the correspondence between zodiac signs and those susceptible bodily parts and functions: 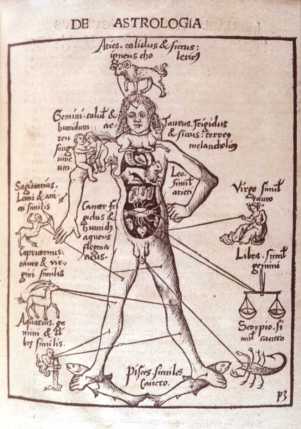 So … thinking of your own star sign, do any of the weaknesses ring true? (Not that we believe such things today!)

SHINE OF A LUCID BEING