The keeping of bees for their honey and other products such as pollen and beeswax is a practice that dates far back into human civilisation. Pottery beekeeping vessels of around 10,000 years of age have been found by archaeologists and the interest in the farming of bees has been continuous across the centuries and in most cultures.

In medieval Europe, beekeeping was well established. While we now think of the sweetness of the bees’ honey as the important product, in the Middle Ages the beeswax was equally prized and was used in the making of good quality candles and writing tablets. 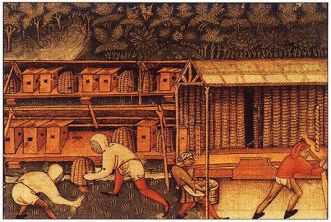 Beehives were made of pottery or wood or wicker, and generally cone-shaped. In colder climates, and in the winter months of more temperate zones, the hives were layered with straw to keep the bees warm (and alive). Harvesting of the bees’ honey and other products was effected by fumigating the hives with thick smoke. This method saved the beekeeper from being stung but, unfortunately, killed the bees so that new swarms needed to be sourced regularly.

While the bees’ products were greatly admired and sought after, there were other “bee” qualities that had come to attention over the centuries. The great Greek philosopher Aristotle (384-322 BC) devoted a long (and keenly-observed) chapter (XL) of his ‘The History of Animals’ to the bee, describing its work and life habits and the society of the hive. Here’s a small selection:

Bees scramble up the stalks of flowers and rapidly gather the bees-wax with their front legs; the front legs wipe it off on to the middle legs, and these pass it on to the hollow curves of the hind-legs; when thus laden, they fly away home, and one may see plainly that their load is a heavy one. On each expedition the bee does not fly from a flower of one kind to a flower of another, but flies from one violet, say, to another violet, and never meddles with another flower until it has got back to the hive; on reaching the hive they throw off their load, and each bee on his return is accompanied by three or four companions. …  Bees seem to take a pleasure in listening to a rattling noise; and consequently men say that they can muster them into a hive by rattling with crockery or stones; it is uncertain, however, whether or no they can hear the noise at all and also whether their procedure is due to pleasure or alarm. They expel from the hive all idlers and unthrifts. As has been said, they differentiate their work; some make wax, some make honey, some make bee-bread, some shape and mould combs, some bring water to the cells and mingle it with the honey, some engage in out-of-door work. At early dawn they make no noise, until some one particular bee makes a buzzing noise two or three times and thereby awakes the rest; hereupon they all fly in a body to work. By and by they return and at first are noisy; then the noise gradually decreases, until at last some one bee flies round about,making a buzzing noise, and apparently calling on the others to go to sleep; then all of a sudden there is a dead silence. … The hive is known to be in good condition if the noise heard within it is loud, and if the bees make a flutter as they go out and in; for at this time they are constructing brood-cells. They suffer most from hunger when they recommence work after winter.

Medieval authors also appreciated the importance of the general qualities of the bee and, in the medieval Christian literary milieu, the bee was often called into service as an analogy for hard work and persistence in the spiritual life. Richard Rolle, the Hermit of Hampole (c.1300-1349), demonstrates this approach in his “Allegory of the Bee [and the Stork]”. In part, he writes that

The bee has three qualities. The first is that she is never idle, and she never associates with those who refuse to work …. . A second is that when she flies she picks up earth in her feet so that she cannot easily be blown too high in the air by the wind. The third is that she keeps her wings clean and bright … .

The spiritual and moral lessons are quite obvious in Richard Rolle’s allegory: Work hard, stay grounded, keep clean in mind, body and spirit.

The men of experiment are like the ant; they only collect and use. But the bee…gathers its materials from the flowers of the garden and of the field, but transforms and digests it by a power of its own.
Leonardo da Vinci

Life is the flower for which love is the honey.
Victor Hugo

Tart words make no friends; a spoonful or honey will catch more flies than a gallon of vinegar.
Benjamin Franklin

“Compassionate toward oneself, we reconcile all inner, and the universe - from within.”